Social Media Winners and Losers of the British BBQ season

The end of summer means it is time to take stock and declare the winners and losers of digital discussions on what to choose for the BBQ. Analysis of the nation’s conversations reveals surprising newcomers, confirms longevity of staple choices, and even new grill brand preferences.

Independent social digital consultancy Immediate Future, has collated a mass of data from social media content, UK blogs, forums and news, including 400,000 social media conversations, to identify what came out on top of digital talking points, and what plummeted in popularity for seasonal outdoor cooking.

And the winners are….

Beverage chillers are the clear winner as a category, with mentions up 400 per cent year on year. In the food section, peri peri sauce came first on 373 per cent. Discussion about fish is up considerably, and mackerel, brisket and blue cheese are among the individual rising stars for increased mentions.

Beer was the most talked about drink for BBQs, cocktails and gin and tonic fell off a cliff in terms of interest, and Tesco came top as shopping retailer. Grill maker Brazier was the highest performing brand name and manufacturer in terms of increase in mentions with a huge 475 per cent rise in attention year on year. It has also been a good summer for Looftlighter – for the uninitiated a brand of electronic fire starter – up 83 per cent.

In the food category, Chicken was the overall meat favourite, and up 22 per cent, while sausages achieved a 10 per cent increase in discussion. Although burgers were second on 14 per cent overall, their mentions compared to last year were down significantly. The previously mentioned Brisket came out ahead for increased interest on 64 per cent.

Of the bread varieties, baguettes, brioche and buns experienced very significant rises in interest of 68, 43 and 42 per cent respectively.

Discussion about fish with BBQs has grown very considerably with mackerel up 96 per cent, and prawns 72 per cent. Salmon is the most mentioned fish type, and also experienced a 48 per cent jump in social conversations. Interest in crab dropped by 78 per cent. 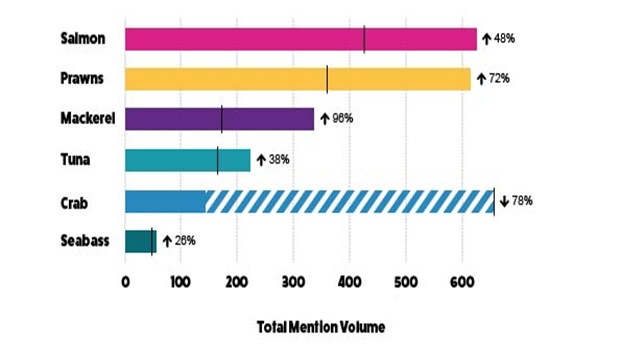 Looking at sauces and there was a spectacular rise in interest for peri peri. Pepper sauce received 61 per cent more attention, while traditional favourites BBQ, garlic and chili sauce remain the most popular staples. Also in the sauce category, butter mentions were up 69 per cent. 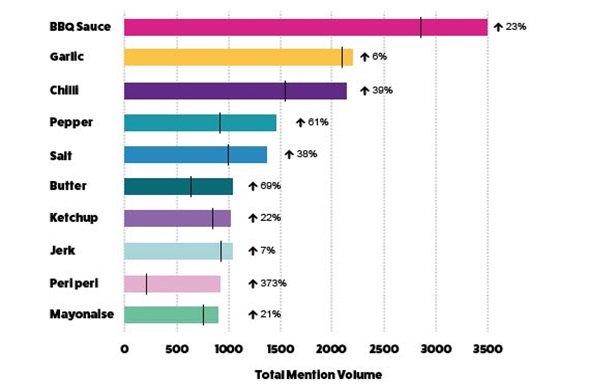 In terms of cheese, the blue variety was the undisputed winner for increased dialogue with a 173 per cent lift followed by cheddar on 77 per cent. However, halloumi was subject to far the most conversations in total, and experienced a 17 per cent rise on last year. 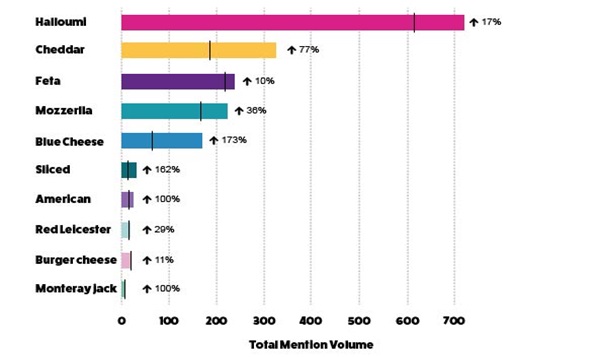 Vegan and Vegetarian food options saw no movement in interest with each claiming 3 per cent of total mentions in the food category, which is no change year on year.

In the drinks category there has been a reinforcing of tradition. Beer has had a very good summer, and lager in particular with a rise in interest of 8 per cent and 40 per cent. Also, Rum was up six per cent, and wine 5 per cent. Cocktails haemorrhaged interest along with the lack of appreciation for gin and tonic not far behind as they fell 85 per cent and 56 per cent. Punch failed to excite as much as last year, and so too Pimms, but the latter is still the only drinks brand name to register in enough popularity to make it onto the chart. 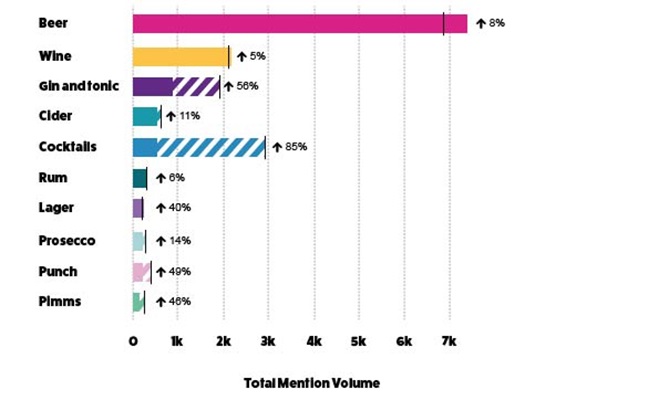 Where consumers shop for barbecuing choices has been a talking point, and Tesco came out clear winners in taking 28 per cent of the conversation on where to buy. Aldi and Morrisons share second place on 11 per cent. Most discussion was centred on multiples with only 8 per cent referring to local butchers.

On to the actual BBQ hardware, and the conversation about grill brands has changed markedly. Brazier had an outstanding increase in interest as highlighted earlier, Cadac was subject to gains in interest of 144 per cent, and Cobb just behind on 138 per cent. Wood fired grills were mentioned most, but nevertheless took an annual downturn of 6 per cent.

While it may seem consumers automatically roll out the BBQ when weather improves, there are specific drivers that are important to understand. During the pandemic BBQs are being perceived mostly as a family activity to do with garden, home and love.

However, what is also significant is that 37 per cent of posts on the subject of barbequing are retweeted, and 27 per cent are replies. Only 39 per cent of posts are original content. This clearly demonstrates BBQs generate large amounts of traction among friends and family eager to join conversations. It means that there are clearly opportunities for marketers to use social media to influence the agenda, and with it buying behaviour.

There is naturally a human interest element to learning about consumer sentiment from these types of figures, but for brands and retailers what is being said, and often as important what is not being said, has a major impact on sales.

Digital conversations about BBQ choices have significantly high engagement rates, which means there are great opportunities to seed ideas and steer behaviour. It is something most brands and retailers struggle with, but we can see that once consumer imagination is stirred then interest can rise from a low point to become extensively talked about. The biggest take away from the analysis is recognising that there are great opportunities to join the conversation to create resonating engagement and influence buying decisions.

We need a new approach to support pension...

DREAMING OF A SUSTAINABLE SLUMBER – NOW YOU...

DO I STILL NEED A TEST COMING BACK...

Princess Diana’s Tiara is officially the most popular...

The future of the accountancy sector lays in...

Bring back memories of Christmas past with PictoScanner

December 10, 2021
Editorial & Advertiser disclosureEditorial & Advertiser disclosureOur website provides you with information, news, press releases, Opinion and advertorials on various financial products and services. This is not to be considered as financial advice and should be considered only for information purposes. We cannot guarantee the accuracy or applicability of any information provided with respect to your individual or personal circumstances. Please seek Professional advice from a qualified professional before making any financial decisions. We link to various third party websites, affiliate sales networks, and may link to our advertising partners websites. Though we are tied up with various advertising and affiliate networks, this does not affect our analysis or opinion. When you view or click on certain links available on our articles, our partners may compensate us for displaying the content to you, or make a purchase or fill a form. This will not incur any additional charges to you. To make things simpler for you to identity or distinguish sponsored articles or links, you may consider all articles or links hosted on our site as a partner endorsed link.