Home Business Rob Wilsher celebrates 20 years of service at Abode
Our website publishes news, press releases, opinion and advertorials on various financial organizations, products and services which are commissioned from various Companies, Organizations, PR agencies, Bloggers etc. These commissioned articles are commercial in nature. This is not to be considered as financial advice and should be considered only for information purposes. It does not reflect the views or opinion of our website and is not to be considered an endorsement or a recommendation. We cannot guarantee the accuracy or applicability of any information provided with respect to your individual or personal circumstances. Please seek Professional advice from a qualified professional before making any financial decisions. We link to various third-party websites, affiliate sales networks, and to our advertising partners websites. When you view or click on certain links available on our articles, our partners may compensate us for displaying the content to you or make a purchase or fill a form. This will not incur any additional charges to you. To make things simpler for you to identity or distinguish advertised or sponsored articles or links, you may consider all articles or links hosted on our site as a commercial article placement. We will not be responsible for any loss you may suffer as a result of any omission or inaccuracy on the website.
Business 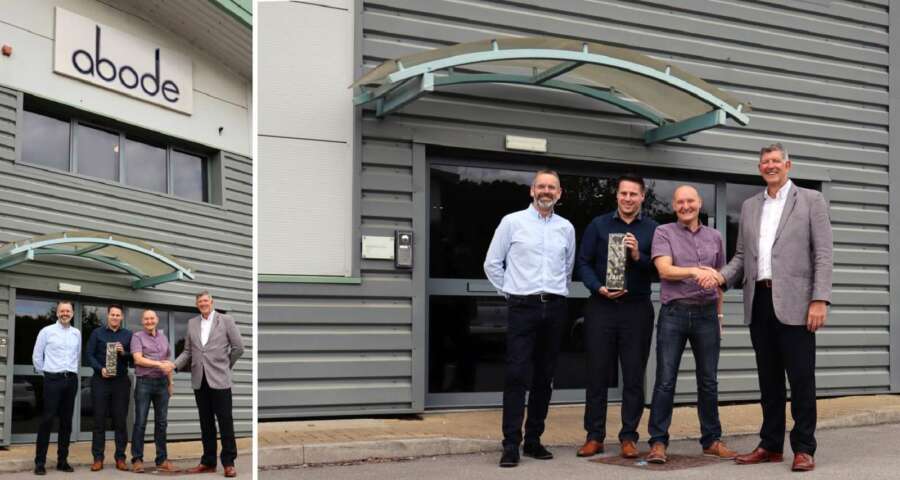 Abode, award-winning designer and distributor of market leading kitchen taps, sinks, bathroom taps & showering solutions has always referred to itself as a family and now, its strong values and company culture help to mark a huge company milestone for one of its team.

Now regarded as the longest serving employee at Abode, Robert Wilsher has been with the company since day one and this month, he proudly celebrates his 20th anniversary with a special congratulatory dinner in his honour.

To further acknowledge this fantastic personal achievement, Rob was awarded his own commemorative trophy, which was presented to him by the directors of the business at company HQ in Yorkshire. Robert Wilsher in the purple shirt is joined by Peter Phelan [Sales Director] far left; Tom Sharpe [Finance Director] holding the longstanding service award; Matthew Pitt [Managing Director] far right.

Matthew Pitt, Managing Director at Abode comments, “Rob started his career with Abode in September 2002, first beginning in the warehouse before progressing into distribution management and then stock control. Supplying him with a depth of knowledge and expertise following two decades of working with the brand, Rob continues to prove his dedication and loyalty every day and has become a great role model for those already in the company or thinking about joining.”

Robert Wilsher, Stock Controller at Abode says, “For me, the last twenty years has felt less like work and more like a fun journey, which I have been able to learn and grow from along the way. Not only am I surrounded by colleagues that I deem as my friends and family, I also get to share how the company and marketplace has dramatically changed over the last twenty years and with that, how Abode has continued to influence and helped to define the latest designs and technologies for the UK kitchen and bathroom.”

The world’s most confusing investment jargon, according to Google

Ten years of auto-enrolment: Cost of living crisis will be headache for new pension minister