Our website publishes news, press releases, opinion and advertorials on various financial organizations, products and services which are commissioned from various Companies, Organizations, PR agencies, Bloggers etc. These commissioned articles are commercial in nature. This is not to be considered as financial advice and should be considered only for information purposes. It does not reflect the views or opinion of our website and is not to be considered an endorsement or a recommendation. We cannot guarantee the accuracy or applicability of any information provided with respect to your individual or personal circumstances. Please seek Professional advice from a qualified professional before making any financial decisions. We link to various third-party websites, affiliate sales networks, and to our advertising partners websites. When you view or click on certain links available on our articles, our partners may compensate us for displaying the content to you or make a purchase or fill a form. This will not incur any additional charges to you. To make things simpler for you to identity or distinguish advertised or sponsored articles or links, you may consider all articles or links hosted on our site as a commercial article placement. We will not be responsible for any loss you may suffer as a result of any omission or inaccuracy on the website.
Home Style & Beauty REVEALED: Who owns the most Googled royal engagement ring?

REVEALED: Who owns the most Googled royal engagement ring? 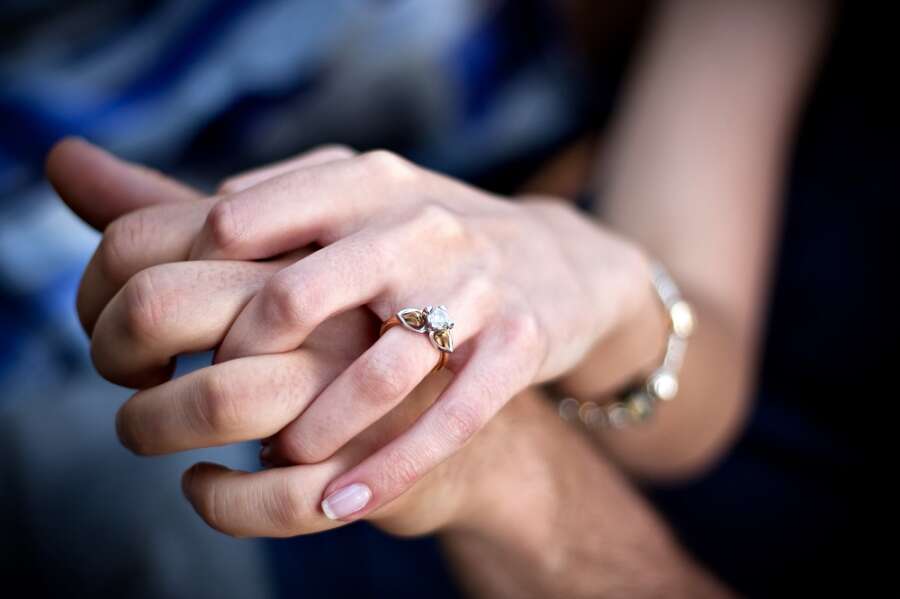 Meghan Markle’s engagement ring is the most Googled royal ring, with 20,000 searches a month

Meghan Markle’s ring pulls in double the searches of the second most Googled ring: Kate Middleton’s

The engagement rings of Grace Kelly, Queen Elizabeth, and Princess Margaret are also top of the list

The Duchess of Sussex’s ring pulls 20,000 searches per month – eight times more than the average monthly searches for all royal rings on the list. The six-carat, cushion-cut sparkler – designed by Prince Harry himself and costing an estimated £100,000 – features a centre diamond from Botswana and two smaller diamonds from Princess Diana’s own collection.

Kate Middleton owns the second most searched for royal engagement ring. The Duchess of Cambridge’s ring, a 12-carat, oval blue sapphire with a halo of diamonds (famously Princess Diana’s engagement ring before her), pulls in 8,200 searches a month – nearly triple the searches of all royal rings on the list.

The research, by creative resource Design Bundles, analysed 25 of the most popular royal engagement rings to discover the 15 most searched in the world.

The engagement ring belonging to Grace Kelly takes third place, with 3,900 searches a month. The movie-star turned princess’s ring, given to her by Prince Rainier of Monaco, was a 10-carat, emerald-cut diamond from Cartier, worth nearly £3 million.

Princess Margaret’s engagement ring is also one of the world’s most Googled, pulling in 3,400 monthly searches – well above the average searches for the top 15 rings. The sumptuous ruby trilogy ring, surrounded by smaller diamonds, was designed by her future husband Anthony Armstrong-Jones to resemble a rosebud – after Margaret’s middle name: Rose.

Queen Elizabeth’s engagement ring – given to her by Prince Philip in 1947 – is also high on the list, with 2,600 searches a month. The 3-carat, round solitaire, set in platinum and featuring five diamonds on each shoulder, was crafted from a tiara owned by Prince Philip’s mother, Princess Alice of Battenburg, and is valued at an estimated £100,000.

Princess Eugenie owns the sixth most Googled royal engagement ring, just pipping her sister Beatrice’s to the post. The luscious, peach-coloured Padparadscha sapphire, surrounded by a ring of diamonds, rakes in 1,600 searches a month. Princess Beatrice’s ring – a stunning 3.5 carat diamond, flanked by two smaller diamonds – pulls in 1,500 a month.

Queen Elizabeth, the Queen Mother’s engagement ring also makes the list of most popular royal rings, with 900 monthly searches. The Queen Mother, originally presented with a traditional sapphire and diamond ring by King George VI, swapped the ring for a large pearl surrounded by diamonds later in life.

Camilla, Duchess of Cornwall – known popularly as Camilla Parker-Bowles – boasts one of the most Googled royal engagement rings, given to her by Prince Charles ahead of their wedding in 2005. The five-carat, emerald cut diamond with baguettes on the side fetches 800 searches a year.

Princess Anne owns the world’s tenth most Googled royal engagement rings – although she has been presented with two in her lifetime. Princess Anne’s first ring, given to her by her first husband Mark Philipps, was a trilogy sapphire ring flanked with two diamonds on the side. The second ring, presented to her by Timothy Laurence, is a cabochon sapphire, set with a trio of diamonds on either side.

A spokesperson for Design Bundles, which conducted the study, said: “There are fewer rarer and more coveted pieces of jewellery in the world than royal engagement rings, and it’s fascinating to see whose rings come up as the world’s most searched. While it may surprise some that Meghan Markle’s trilogy diamond ring is now more Googled than Kate Middleton’s renowned sapphire, there’s no doubt that all rings on the list represent infinite historic worth and beauty”

The study was conducted by Design Bundles, which offers high quality premium design resources and a marketplace which allows graphic designers to register and sell their products.

Five Simple Steps To Ensure You Are Party-ready...

Innovation in Sight: The Changing Face of Eyewear