Home Style & Beauty The World’s Most Googled Fragrances
Our website publishes news, press releases, opinion and advertorials on various financial organizations, products and services which are commissioned from various Companies, Organizations, PR agencies, Bloggers etc. These commissioned articles are commercial in nature. This is not to be considered as financial advice and should be considered only for information purposes. It does not reflect the views or opinion of our website and is not to be considered an endorsement or a recommendation. We cannot guarantee the accuracy or applicability of any information provided with respect to your individual or personal circumstances. Please seek Professional advice from a qualified professional before making any financial decisions. We link to various third-party websites, affiliate sales networks, and to our advertising partners websites. When you view or click on certain links available on our articles, our partners may compensate us for displaying the content to you or make a purchase or fill a form. This will not incur any additional charges to you. To make things simpler for you to identity or distinguish advertised or sponsored articles or links, you may consider all articles or links hosted on our site as a commercial article placement. We will not be responsible for any loss you may suffer as a result of any omission or inaccuracy on the website.
Style & Beauty

The World’s Most Googled Fragrances

Perfume can be more than just a beauty product. One simple spritz is enough to evoke distant memories or remind us of particular places and people. And while finding a signature scent can seem a challenge with so many choices, its easy to understand why the hunt is so worth it when you do eventually find ‘the one’.

For those a little indecisive, new research from Fragrance Direct has analysed over 100 countries and 10,000 fragrances in a bid to reveal which are most desired around the world. By using Google search data from the last 12 months, the study highlights which scents we can’t get enough of, and the most popular notes featured in each.

The Most Googled Fragrances Worldwide

Estee Lauder Estee is officially the most searched for perfume worldwide, with an eye-popping 962,710 searches. Launched in 1968, the sweet and soothing, classically feminine notes are clearly a big hit with customers around the world.

Versace Eros takes second place with 281,270 searches. Named after the Greek God of love, lust and sex, this men’s fragrance combines oriental sensualities with the zest of Italian lemons. This bold and intense scent is clearly building a formidable following worldwide.

In third place is Carolina Herrera Good Girl with 186,180 searches. This playful scent comes packaged in an eye-catching stiletto bottle, and the pleasing hints of almond and vanilla have clearly been whipping up a storm worldwide. 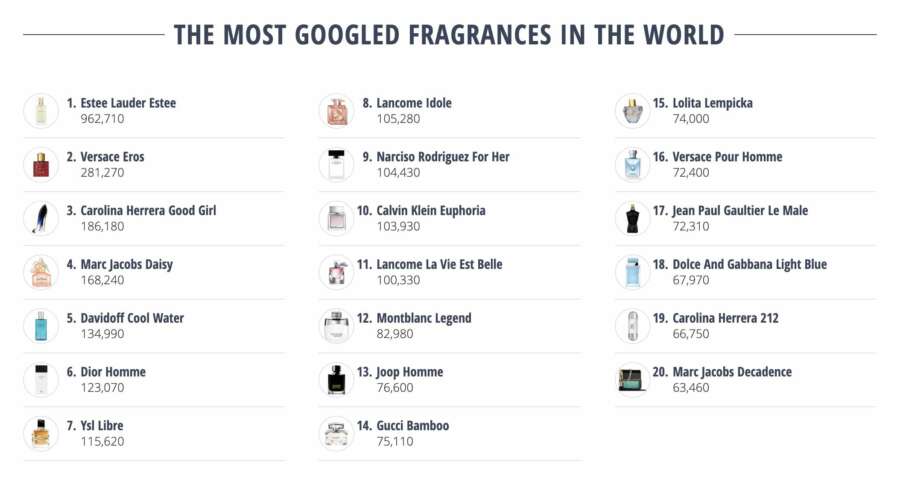 Looking specifically at the UK, Estee Lauder takes the top spot once again with 110,000 searches.

British women are also head over heels for Marc Jaco  bs Daisy which comes second with 40,500 searches. The gorgeously playful bottle reflects its bright and sunny scent, and the fragrance hopes to celebrate optimism, self-expression, and authenticity, providing some much-needed positive energy for 2020.

Diesel’s Only The Brave also cracks the top 10, proving to be a popular choice with British men. The iconic clenched fist bottle design conveys the values of masculinity and confidence, and the woody fragrance is ideal for the Autumn months ahead. 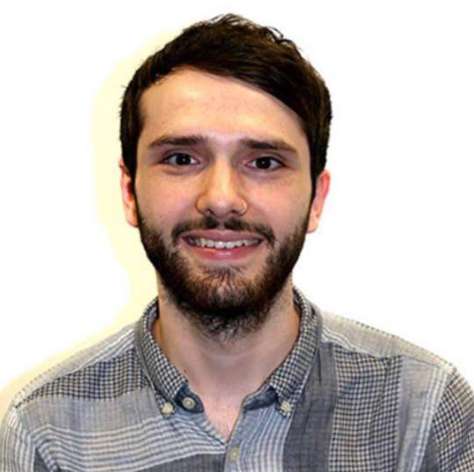 Jean Paul Gaultier Le Male is another men’s fragrance to make it into the list. Again, the iconic bottle is instantly recognisable on the high street or online, and the unique fusion of lavender and mint has proved popular with men the last 25 years.

While Jimmy Choo might be a newer player in the fragrance game, their 2011 perfume Flash is still proving popular according to the data. The glitzy bottle which resembles a shimmering disco ball, along with the confident and decadent notes make it the ideal companion on an evening out.

The Top 10 Fragrances By Country

As we’ve seen so far when it comes to fragrance, tastes can be as diverse as they come. And while our individual senses and experiences are different, so too are the perfume preferences when looking at one country to another. And while iconic scents still have cross-continental appeal, its also interesting to note the differences.

In Germany for instance, Versace Eros is the most searched for, with 33,100 searches. France on the other hand, are searching for Dior Homme the most, preferring woodier and more sensual notes. Crossing the Atlantic over to Brazil, Carolina Herrera Good Girl tops the searches.

Estee Lauder Estee is the most popular worldwide by some margin however, with it being the top fragrance in over 50 out of the 100 countries analysed.

Looking at the brands that feature most, fragrances by Lancome make two appearances in the female list. Both Lancome Idole and La Vie Est Belle clearly resonate with women from around the globe.

When it comes to the men, Davidoff Cool Water is the most Google aftershave overall. With such an iconic TV advert, this result comes as no surprise! This scent also broke the top 5 in 43 countries, and proved to be particularly popular in India, Pakistan and Thailand.

Breaking Fragrance Down By Notes

Similar to the notes of the song, the notes used in perfume are the individual components that when combined, form a unified and pleasing perfume.

From the perfume’s analysed, Rose is officially the note used the most, suggesting the world is fond of soft and floral scents. It is also the heart note in Estee Lauder Estee, the worlds most desired perfume.

It seems we’re also all fans of fruity fragrances. From Oranges to Peaches, these refreshing aromas appear in some of the most popular choices, including Dolce and Gabbana The One and the iconic Joop Homme.

How You Can Make Money From Home