Home Uncategorized LCP Report: Is PCL set for a bounce
Our website publishes news, press releases, opinion and advertorials on various financial organizations, products and services which are commissioned from various Companies, Organizations, PR agencies, Bloggers etc. These commissioned articles are commercial in nature. This is not to be considered as financial advice and should be considered only for information purposes. It does not reflect the views or opinion of our website and is not to be considered an endorsement or a recommendation. We cannot guarantee the accuracy or applicability of any information provided with respect to your individual or personal circumstances. Please seek Professional advice from a qualified professional before making any financial decisions. We link to various third-party websites, affiliate sales networks, and to our advertising partners websites. When you view or click on certain links available on our articles, our partners may compensate us for displaying the content to you or make a purchase or fill a form. This will not incur any additional charges to you. To make things simpler for you to identity or distinguish advertised or sponsored articles or links, you may consider all articles or links hosted on our site as a commercial article placement. We will not be responsible for any loss you may suffer as a result of any omission or inaccuracy on the website.
Uncategorized

LCP Report: Is PCL set for a bounce

As Estate Agency across the UK begins to re-open following the lifting of Government Guidance to ‘Stay at Home’, the ONS recently released its latest UK House Price Index which predates the UK Lockdown.

London Central Portfolio (LCP) has now undertaken its own in-house analysis of the data to specifically examine what has happened in the Prime Central London market (PCL) and how it may respond following the initial after-shock of the Covid19 pandemic.

• This analysis indicates that PCL saw a far more pronounced rally in the second half of the year than the rest of the country with a 9.8% increase in prices.

Having suffered from suppressed demand following a succession of punitive tax increases and the uncertainty created by the EU Referendum in 2016, PCL has been long overdue a reversal of fortune. By the end of 2019, prices in PCL according to most commentators were down some 25% from their peak in 2016/17. More realistic pricing and a degree of political certainty following the December General Election meant buyers began to snap up available stock particularly within the first three months of 2020. This noticeable increase in activity has become known as the ‘Boris Bounce’. 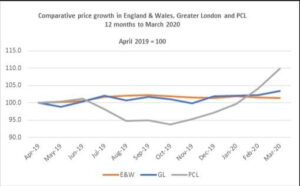 Despite the initial and immediate impact that the onset of Covid 19 has had on buyer activity, sellers have proved reluctant to further significantly discount as a result of the pandemic.

Andrew Weir, previously head of Foxtons and now CEO of LCP, comments: “For transactions already in the pipeline when the ‘Lockdown’ came into place, sellers have in some instances accepted up to a further 5% discount. Buyers seeking to be opportunistic and negotiating more aggressively have by and large been sent packing. Sellers re-marketing these properties have quickly re-achieved their prices despite the only very recent ability to conduct physical viewings within strict guidelines. This all indicates that the buyer’s window of opportunity to acquire at bottom of the market pricing in PCL may be rapidly closing”.

Weir adds “Never try to second guess either the peak or the trough. If you think you can spot it by looking back over your shoulder, you have most likely missed the moment”

• Although the brief surge in prices following the ‘Boris Bounce’ has hit a road block due to Covid 19, PCL’s performance at the start of 2020 shows strong similarities with the Global Financial Crisis in 2008/2009.

Following a rapid depression in the market due to a lack of global demand, prices rallied by a staggering 26% between March 2009 and January 2010. Again, the bounce back was considerably more marked than in the rest of the country where prices increased by just 4% over the same period, as it faced domestic issues such as affordability and unemployment.

PCL, on the other hand, quickly regained its attractiveness as a safe haven asset class for many deeply entrenched reasons; the rule of law, GMT time zone, prestigious schools and universities, the global business language and a diverse and liberal culture. These factors will undoubtedly come into play again. 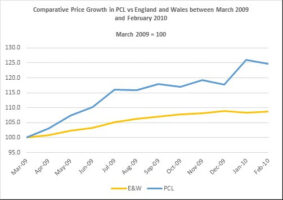 This has been a function of a lack of demand due to the impact of taxes and Brexit uncertainty coupled with few distressed disposals in the market. Most owners are simply prepared to wait until circumstances are conducive to selling.

Current stock levels mean any improvement in sentiment once lockdown eases could reignite a similar upward trend in prices as pent up demand is released, as witnessed post GFC and immediately after the 2019 General Election. More buyers and limited inventory are likely to stimulate price growth.

Naomi Heaton, LCP Group Chairman concludes, ‘The Autumn may produce more stock for sale but accompanied by a corresponding increase in demand. We anticipate that circumstances could lead to a stronger PCL market in 2020/21 than many currently predict, just as we did in early 2009.’

Coronavirus: the end of car showrooms?